(Please note these tips and tricks assume you are familiar with/a user of Sudowrite.)

I was asked: I would love to understand your basic workflow. So something that provides examples of a hypothetical scene/short story to how much content you think should be placed into Sudowrite before beginning. How you work with Sudowrite (favorite tools so far).

This page will try to answer that—and again, I cannot stress strongly enough that there is no right answer. This is how I do it. This may not be how you do it. How I do it may not work for you. Sudowrite is a tool, and this information should be taken to inspire you to find your own way with the tool (if at all.)

And at first, I write—and I write relatively simply. I don’t get very hung up on description or nuance at this stage. I concentrate on dialog and quick descriptions to sketch out the action. An example:

I swung my leg across the mat and pounded my fist. The blow hit his chest like a rock on granite. He fell motionless after flying 10 feet backward into a wall. His body slamming into concrete drowned out all other sounds.

I cocked my head and grinned.

Dave wheezed, then coughed. After catching his breath, he looked up and raised an eyebrow. “Next time, plant your back foot.”

I rolled my eyes. I put him down without putting my back foot down.

“It worked well enough,” I told him as I popped up out of my stance and ripped the Velcro off my wrist brace.

And I cut and paste this into Sudowrite. (I write in Scrivener exclusively.) Usually I’ll start by running WRITE(AUTO) just to see what it comes up with. My settings are 4 cards, 200 words, and I may or may not include key details. It depends. I use just one dot up from least creativity because I tend to want to keep a tight leash on Sudowrite. 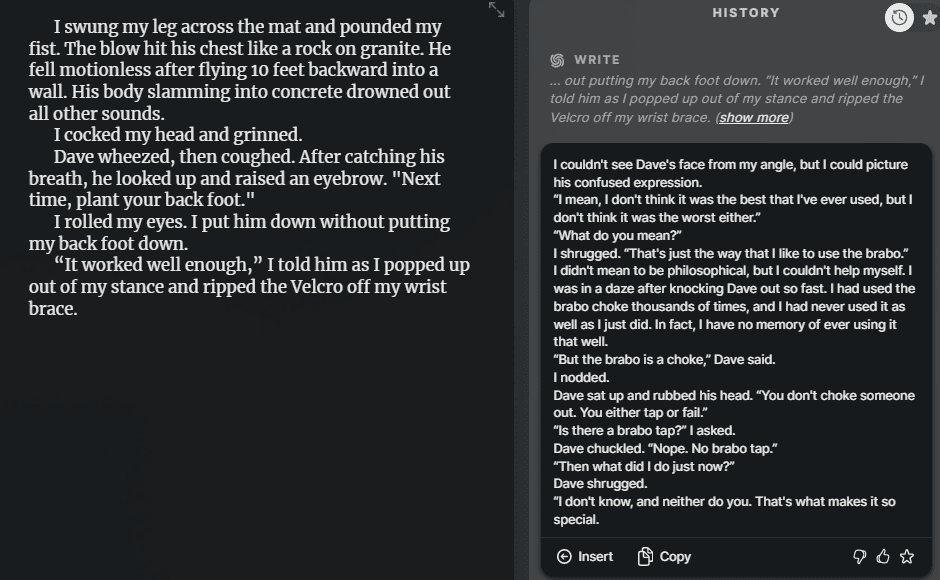 Sudowrite did a great job picking up on what was happening in the scene without my explicitly saying it. The AI realized this was some type of martial arts class, and so it introduced discussions of a brabo choke. The problem, of course, being that the protagonist struck Dave, and the brabo choke is an arm triangle choke performed by threading an arm under an opponent’s neck. Without context, the AI just grasped for something vaguely martial arts-y—in this case, Brazilian Jujitsu—and threw it in there.

But I wouldn’t re-run this. I would poke around and see what I could use and incorporate after modifying it.

But Leanne, you could have just written those two sentences faster (and cheaper) than the time and money it took you to run those cards.

So, yes, but I do it anyway. And I’ll tell you why—all writers have repetitive tics, word choices or phrasing choices that come up again and again. Too often. Way, way too often. Minimizing those tics and preferences and tendencies is essential for good writing, and we all spend time during the second draft stomping out those tics and repetitive tendencies that snuck in during the first draft.

I just do it at the start.

Examples that the AI shows me ideas and examples of where to go next. Whether that’s an action I wouldn’t have thought of, a phrase that doesn’t come naturally to me—anything I can do to make my writing richer and more varied within my own style is a win for readers.

Once the chapter is written (and it’s usually written in this rather piecemeal write/generate/write/generate with nuggets being snagged as they come) I come back the next day and put in the color. I generally run DESCRIBE on an entire paragraph just to see what I get and then use some of what I get to start making the text more dynamic and slightly more compelling:

If nothing in the whole paragraph DESCRIBE makes me happy, I will start running DESCRIBE on just one sentence. 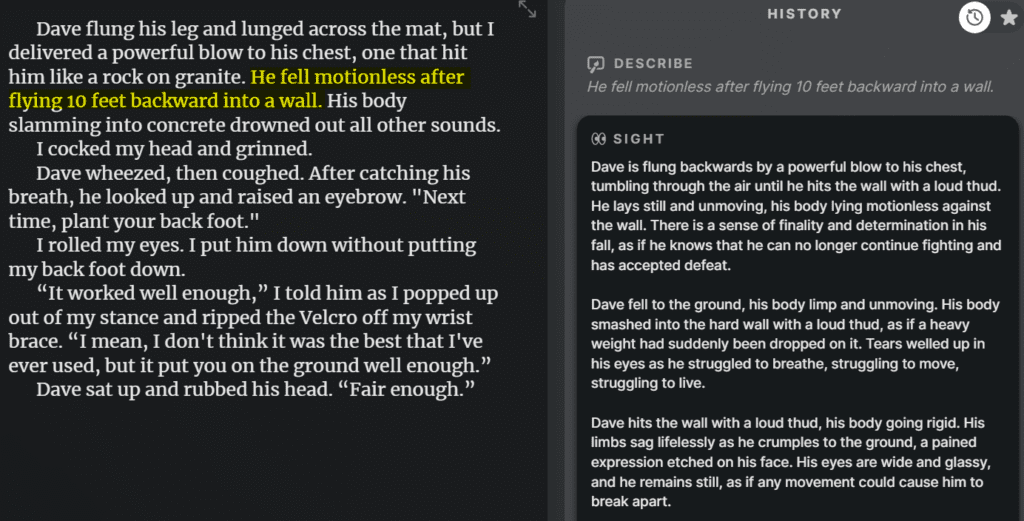 I’d pretty quickly discard Paragraph 1 and 2, but 3? That’s the winner, and I’d incorporate some of that. Editing would continue until done and ready for polishing.