So, a few days ago I said this:

Did I feel like a computer was writing my book? Not remotely. It wrote words, but they weren't MY words-my tone, my voice, my vocab, my cadence. It was like a menu, and I chose what I wanted. Then lobbed ketchup all over it to make it my own.

And I think I spoke too soon.

I finished Owl’s Fair yesterday, and on a lark, I decided to play with Sudowrite. Could the AI, I wonder, actually write? What could it give me to start? Sudowrite has an experimental lab with the following directions. “Write a scene summary (less than 100 words) in the Editor, highlight it, and click the Expand button. A good summary succinctly describes the characters, setting, conflict, and how it resolves.” So I did.

I delete the documents as I finish my scenes, but I provided it with something like “This scene is written in the first person from Astra’s perspective. Astra Arden, a witch, and Emma Sullivan, a police detective, are looking for a stolen necklace in a park. Astra finds it.” Or something equally as simple and benign. You can see a smidge of it below. I hit the button and let the AI do its thing.

On the left is my initial cursory editing of the scene based on what the AI (right) gave me. 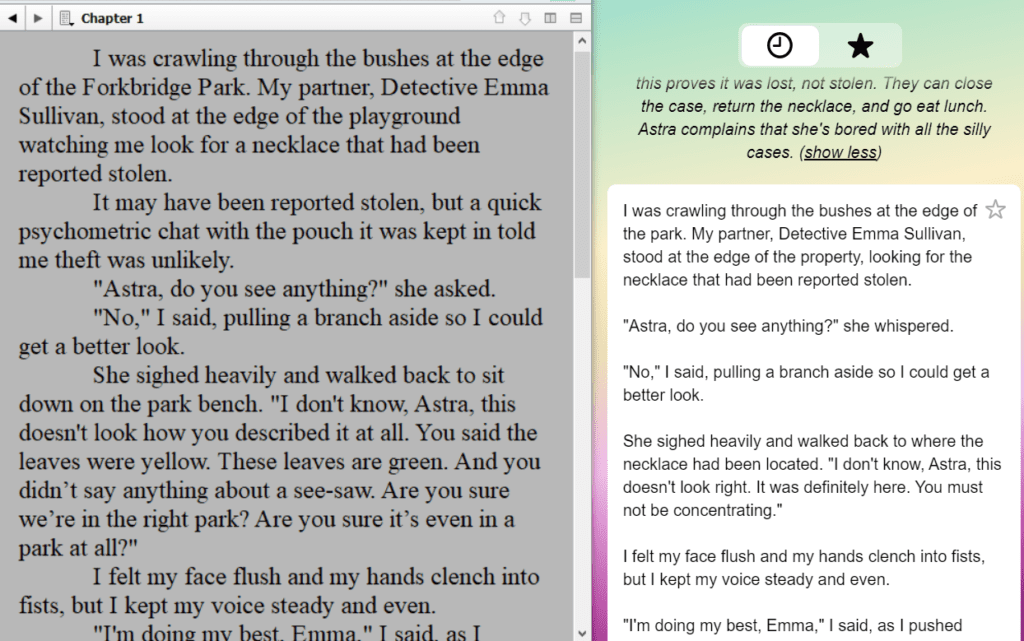 It was far better than I suspected it would be, but it fell short of being able to literally map out a whole scene. So, I went at it a different way—I described the beats and exchanges in the scene and spun up sections. As I got what I wanted, I edited and placed edited sections into wormhole (which is not experimental and seems a bit less hit or miss) to spin up a bit more.

Though halting at first, by the end of the afternoon, I had a full chapter of Magic’s a Hoot primarily utilizing this back and forth. The bones of it had been generated by the AI. Everything started with the AI. All of it. Like I said—it started out as an experiment. Just something to do on a Friday afternoon, just playing around with a new tool.

And yet, reading it…it was a perfectly good chapter. I edited, shaded, changed…nothing seemed out of place. It’s like the AI provided an outline, a scaffolding to sculpt on, and I took it and carved and colored the nuance.

But I will admit to you, I paused, stared, and felt vaguely unnerved by it.

I never intended, when I got the tool, to use it in this manner. And yet I had, and I had a 3500-word head start on a book I needed to write. I’d also doubled my production—I write a chapter a day. Yesterday, I “wrote” two. (Ironically, my strength tends to be editing—it’s the part I find fun, where the colors and subtlety really get sussed out in my process. I also put all the jokes and funny and snark in during editing. So, yeah, favorite part.)

Writing is probably one of the last creative endeavors relatively untouched by technology. Yes, I have Grammarly Pro. And ProWritingAid. I also use WordRake because my crutch words are many and varied. But I also still have an editor. None of these tools (well, except my editor) work as well as one would hope they would.

Meanwhile, in Photoshop, I can click a button and turn an image into a watercolor painting in two seconds. Does that make the end result truly belong to some computer code?

The act of writing is still one person spitting out words from their brain, and that may be changing. I spent yesterday asking myself whether how I get the initial frame or the starting words is important, or if it’s the end result story? I mean, these are established characters in an established town with an established personality. The AI didn’t write that. I directed the AI where to go. I took its words and molded them and massaged them into something that fit the established series. It’s mine. Right?

Several friends said, with some discomfort, that this will put us out of business. The authorship singularity, I guess, where humans are rendered obsolete and we authors are put out to pasture in favor of AI’s that can spit out a novel in minutes instead of weeks or months. And I have to admit I’m not sure I disagree with them. Like I said…I felt pretty uneasy. I did, to an extent, feel like a plagiarist all of a sudden.

But I also don’t think my choice to use this tool or not changes the future. The future keeps coming no matter how many people rail against it.